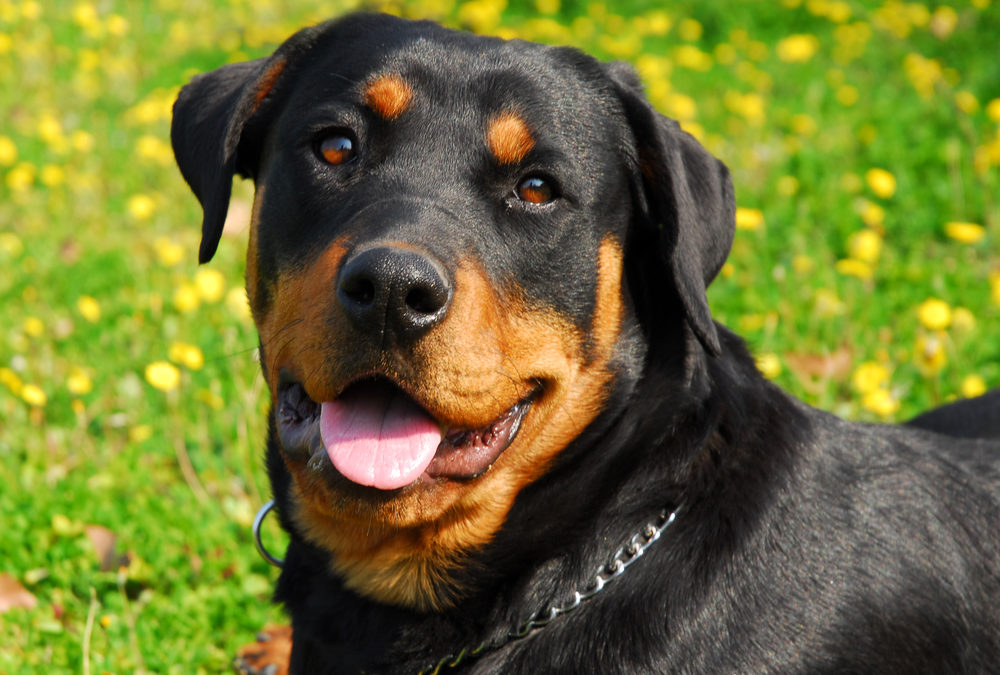 There are many opinions about the Rottweiler breed, and most of them are not positive. Because of the physical characteristics and its unearned reputation, the Rottweiler is often considered a dangerous, violent dog.

Unfortunately, these opinions are developed on assumptions and false information that this dog does not deserve. Here are the top 6 misconceptions about Rottweilers.

1. Rottweilers are aggressive and vicious.

This opinion is the go-to myth that some people fall back upon with any dog breed they deem violent and unpredictable. In truth, the Rottweiler is a steadfast, friendly, and affectionate dog.

Yes, this is a medium-large dog with imposing looks, but as long as he is treated and trained with care, patience, and consistency, the Rottweiler will return the love given to him.

In fact, a recent study by Dognition found Chihuahuas to be far more aggressive than either Rottweilers or Pit Bulls!

As with any breed of dog, if a Rottweiler is abused, neglected, or mistreated in some way, it may indeed become dangerous and aggressive.

2. Rottweilers are dangerous with children.

Because of the myth perpetuated in Misconception #1, Rottweilers are often considered unsafe around children. Remember, Rottweilers are no more hazardous to a child than any other dog breed.

When raised and trained properly, they are protective and loving of their family members. They make excellent guard dogs, too.

Children should be taught how to behave around animals, whether the family dog is a Rottweiler or a Golden Retriever. Above all, never leave a child unsupervised with a dog.

In the majority of dog attack cases involving children, the attacks happened when the child was unattended. If a kid does not know how to treat a dog, leaving him alone with the dog, no matter its breed or size, is not a wise idea.

3. Rottweilers are stubborn and impossible to train.

Rottweilers have a long history of working with the human race, starting from its origins over 2000 years ago as a descendant of the cattle drover dogs that traveled with the Roman armies in what would become German territories.

They were also used for bear hunting and pulling butcher’s carts. In modern times, Rottweilers have been trained for police work, service and therapy work, and for use in the armed forces.

A breed that has accomplished that much can clearly be trained. Rottweilers do have willful personalities, but they are also intelligent and enjoy learning. They make highly obedient family dogs when they are trained correctly and with consistency. This statement is a very unfair assumption as any Rottweiler who has been properly trained can learn to share a home with other animals. Careful introduction and socialization from an early age will make this process much easier.

While Rottweilers can learn to live with other animals, always be careful with small pets that a dog might consider prey, such as cats or rabbits.

Rottweilers tend to work very well with other dogs, but making sure that all dogs involved are neutered will prevent territorial behavior from occurring.

5. Rottweilers should be kept outdoors.

Despite its history as a cattle dog, Rottweilers in modern times should not be kept outside day and night. This is a sociable breed who needs to be kept in the home and around the people they love.

Rottweilers who are left outside and separated from their owner become isolated, and this may lead to depression, separation anxiety, and destructive behaviors. This type of dog should get plenty of outdoor exercise — play, walks, running in the yard — but because of its need for human companionship, the Rottweiler should be brought in the home to be with its family.

6. Rottweilers turn on their owners. Rottweilers are loving, loyal dogs and are also the 8th most popular breed in the United States. Those facts are directly at odds with the false notion that Rottweilers turn on their owners. Surely if that were true, these dogs would not be such a popular breed!

Yes, there have been instances where Rottweilers have attacked and bitten their owners, but those cases can be found with virtually any dog breed. The common denominator is how the dog has been treated.

A Rottweiler who has been beaten or abused by its owner will become fearful and stressed. It’s understandable as to why the dog might try to bite the hand that hits him the next time he is beaten.

Physical punishment should never be used as a disciplinary measure against a dog, regardless of the breed. When treated with love and kindness, a Rottweiler will never turn on its owner.

The Rottweiler is an often misunderstood and maligned breed. In reality, they are hard working dogs who have immense love and affection for their families. The dog’s loyalty, sociability, and playfulness are what make this breed a popular one. With proper training and care, the Rottweiler can be a family’s best friend.

Here’s another article we thought might interest you guys by Jess Miller about How to Help a Dog with Separation Anxiety. Read the full article here.